A couple of streets away from Earls Court station, you’ll find a door with an old fashioned lamp above it and a queue of twenty-somethings standing outside. No, its not the entrance to a 1 Direction secret gig (although the twenty-somethings would certainly have one up on the tween population if that was the case!) its the entrance to one of London’s very cool themed restaurants.

It’s called Evans and Peel and plays out as a basement speakeasy where discretion is the name of the game on all accounts. Once  you manage to find the place, buzz the bell and finally get through to someone on the other end, you are summoned downstairs in the groups you have come with, to face a man dressed up, as per the era, ready to interrogate you about “your case.” Ours was the search for the KFC Colonels secret recipe (as you do) and we had a long and rather amusing grilling about the hunt for fast food chicken, Big Macs and the odd Burger King establishment. Once satisfied that your case is ‘legit’ you are let in to the secret world of Evans and Peel. 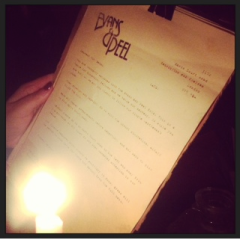 The great thing about this place is that it really does transport you to another world. The lighting is pretty much non existent, bar the candles at your (very small) tables. There is a no-standing policy, so although a tiny space, you do feel like you’ve got privacy to have your own discussions without some stranger in earshot or without you having to raise your voice too much to compete with an over crowded room – the atmosphere is just right.

Food isn’t the main priority at Evans and Peel – they focus much more on their drinks. One word of advice, be prepared to pay a pretty penny for the drinks as they don’t come cheap! Cocktails will set you back around £10-11. But what you do need to remember is that 1) they don’t scrimp on the alcohol, you really do get a kick from it! 2) You’re paying for the experience. As well as a few moonshine beers, we also tried their recommended drink of the day – The Whiskey Barrelled Martinez – which felt almost as if you were drinking syrup it was so heavy and takes a lot of guts for even the heaviest of drinkers to do anything beyond slowly sipping it.

The food that is available, is served in a tapas like way – lots of small plates with sadly not a lot on them. We have to say that this is the biggest let down of the evening. The food is extremely expensive and not only does it lack in size, there really isn’t anything stand out either. Just to give you an example, four mini burgers and three sides known as the ‘whole caboodle’ will set you back £32, and realistically wouldn’t be a full meal for just one person, let alone the party of four we were with. Its a real shame, as there is the opportunity to do something really fun with the food here.

All in all, we’d recommend Evans and Peel as a great date night venue, perfect to impress with as its cool, kooky and definitely a lot of fun. This wouldn’t go on the cheap end of the price scale however, so if you do want to experience the evening properly, you’ll have to be prepared to pay around £50 per person for your night there, if not a bit more. But what you do get is something different, something hidden and an experience that definitely does break away from the norm, even if the role playing aspect kind of stops at the secret doorway. All in all, it’s good, but with a little more TLC, could be a lot better.