In Balham and Streatham, South London, you’ll find the start of a food franchise called Beyrouths. Its name is based around the themes of urban Beirut, a city that has been a cultural inspiration for the world for many decades.

Beyrouths serves up Middle Eastern food in an industrial setting giving the impression of the rebuilding of a great city (there is lots of purposely placed scaffolding) amongst wall to wall sized black and white photos of deserted middle eastern city streets. You sit on mix and match wooden tables, perhaps quite like you would find in its original inspiration setting, and this adds yet more quirkiness to the features as you walk in.

Its concept is to have clean, inspired and recycled style, blending the timeless features of the Middle East with the sophisticated modern world. Beyrouths’ offering also promises to be simple and quick table service with fresh foods. The latter, we agree is the case, the food is fresh and severed in a unique Middle Eastern style, which has stayed mainly within small independent mezze restaurants and never quite yet hit a franchise level.

On the other hand, given the vast size of the restaurant (in Streatham) the teething problems become apparent with the ‘not so’ quick service, and that the phrase service with a smile isn’t always the case.  Even though the restaurant was only half full at the time of us dining, it seemed to be slightly understaffed, so if you’re in a rush, beware, you certainly wont get your bill quickly. 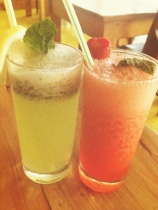 On the upside, the food itself was delicious, starting with the drinks – we were recommended to try the green lemonade, which is apparently causing quite a popular stir on Twitter with its minty kick and fresh zesty lemon flavour. As enjoyable as this was, we think the pink lemonade triumphs even more, you taste the feeling of summer strawberries alongside the lemon to make it a moreish taste bud tickler!

The mezze style comes in the forms of the sides, which are mainly offered as a starter, we went with the moussaka which didn’t quite turn out as expected (same word, different meaning!) but was still very tasty and served with a beautiful flatbread. Additional to that, we also tried an aubergine hummus, which plays home to a big dollop of olive oil in the middle which adds that fresh feel. 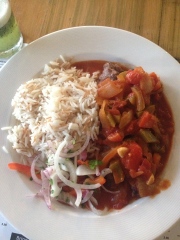 The main meal was selected from a menu of chicken and lamb (and of course vegetarian options too) for around £10.50 you get a decent sized portion, but depending what you order, you may find the food is quite dry on its own, so may need to pick a yogurt to accompany it. Overall though the main meals are impressive, perhaps a little over cooked but tasty none the less.

Although this is street food, you wont be paying “market” street food prices, look to spend around £20+ per person when the bill comes. They do a brilliant Bring Your Own incentive with £1 for corkage, which if you’re planning a boozy night makes this place affordable and unique to eat in. As previously mentioned, this is a relatively new franchise, so we can forgive the teething problems that were faced.

Overall it’s a fun and different eating experience, a good introduction to Middle Eastern food, but just slightly missing the mark on smaller Mezze restaurants which have more of a tailored and attentive approach to their customers and provide more of that personal homely feel.