So last night was opening for the third installment of Trafalgar Transformed. Starring Hayley Atwell and Matthew Horne as two well known names that make up half the cast, The Pride is an award winning play directed by Jamie Lloyd.

It follows three people Oliver, Philip and Sylvia, who in two separate time periods (the 1950s and the present day) are all brought together in a complicated love triangle. The through riding theme is homosexuality and sexual liberation and not how the outside community deal with it, but how those directly involved approach their own complicated relationships given the attitudes and oppressions of their timeframes.

The play, cleverly intertwines between the two time periods; the future providing a more relatable and humorous approach, with a stronger message underlining.  Although billed as the lead role, Hayley Atwell plays second fiddle to the superb Al Weaver, who portrays Oliver, the only character in both periods who is happy to admit his sexuality and drives the experiences that occur. His sharp interchange between the two eras is the most challenging out of all the actors and he handles this with ease and gives the audience strong distinctions between his character of past and present. Atwell, is a superb support, as an audience member you relate strongly to her Sylvia of the 1950’s as its not far off to many period roles you have seen her on screen before. Bring her to present day though and you see Atwell embrace a more modern role which initially surprises the audience but also allows you to warm to her.

Harry Hadden-Paton who plays Philip is a more somber, cautious character, in the past he battles hiding his real sexuality behind a marriage, until Oliver comes into his life and in some respects brings him to life in his true form. However all the restraints of the 1950s causes inevitable turmoil and destruction and Philips wife Sylvia can only watch her marriage unravel. In present day Paton plays the estranged partner to Oliver and his infidelity and Paton plays a strong clear calming balance to Weaver’s much more flamboyant take.

The real stand out, is Matthew Horne, used sparingly as a variety of characters, Horne demonstrates his versatility as an actor from a Nazi dressing rent boy (which provides some much needed light relief) through to a cheeky chappy know-it-all but actually knows very little magazine editor. These characters may be written as relatively extreme in the script but his ease in transformation made you wait with baited breath for his next appearance. 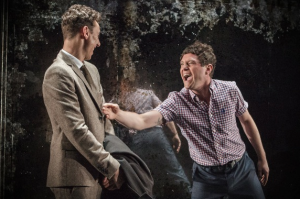 Alexi Kaye Campbell’s fantastic writing is brought to life brilliantly with the synced cast who deliver the quick pace with ease. You can see why this play was award winning when it first premiered at the Royal Court in 2008, it brings light and dark contrasts on the subject of sexual liberation and more importantly relationships, and has a fantastic cast to pull it off. If you can get yourself a ticket, are interested in the subject and love good theatre, then this is definitely one to watch.