For anyone who is looking at the Hobbit posters that are plastering our walls, buses and underground stations, and wondering whether or not its worth your time (about 2.5 hours) and money to sit in a dark room throughout party season; I can categorically tell you it is!

Forget the first installment of the film franchise and all its appalling high frame rate filming and dull overly long set up plot lines, The Hobbit: The Desolation of Smaug is a triumph! What was lost in the first film is the distinct transportation to another world (its pretty hard to get lost in a film when the clarity of the filming is so high you can see the prosthetics covering each characters faces) and more frighteningly a lack lustre sense of action and adventure. Luckily part two brightens up all our woes and keeps you on the edge of your seat from start to finish! 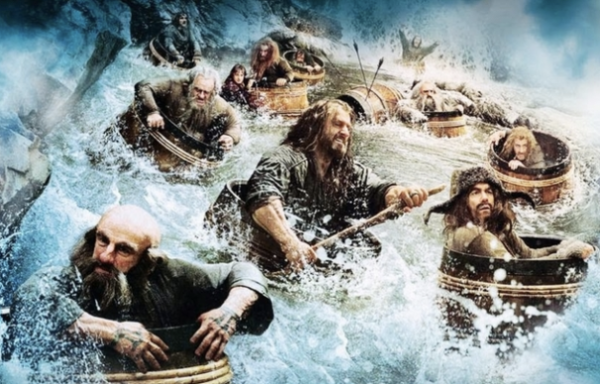 I know its always a good sign when I remember to check my watch and realize that its already over two hours through. I had been so preoccupied before hand with everything going on, I didn’t even think I stopped to take a breath let alone look at the time!

The Hobbit: The Desolation of Smaug is the continuation story of Bilbo Baggins the dwarves and Gandalf the Grey as they continue their journey to reclaim their rightful homeland Erebor, from the fire-breathing dragon that is Smaug. Unbeknown to the rest of the group, Bilbo is also in possession of a magical ring which gives him extraordinary powers and makes him a brave and valuable asset on this quest.

First and foremost the action is amazing. Whether it is a newly tweaked version of the 48fps or indeed the standard 24fps version, you will be dazzled by the intricacy and excitement of each action led sequence. One key highlight has to be the battle with giant spiders, which with added 3D gives them a new monstrous perception and will make you shudder out of reach in your cinema seat. Secondly, is the incredibly impressive river barrel sequence, with prancing elves killing Orcs with “endless” amounts of arrows, the logistical reality does not come into play in any way within this sequence as its 15 minutes of glory is truly breath taking.

Each character that we have seen in the first installment of the franchise becomes more developed in their own right in this film. Bilbo has an increased level of confidence thanks to his secret weapon, Gandalf goes off to fight his own battle against Sauron, and there is an interesting start of a love triangle between Killy (Dwarf), Tauriel (Elf) and Legolas (Elf) which is left hanging ready for the conclusion in the third film.

And finally, we get to Smaug – Benedict Cumberbatch is superbly cast as the greedy dragon resting in the Misty Mountain awoken by Bilbo. The detail that is used to create the dragon is some of the best out there, each scale is clear to see and the fire in Smaug’s belly prepares you for a visual feast of fire and gold.

To round up, The Hobbit: The Desolation of Smaug brings Peter Jackson back to Tolkien’s original fantasy and his directing best. Fun for all the family, this film is THE go to film for the Christmas period and not one to miss.

Its here, the brand new teaser trailer for the next Hobbit instalment. What did you think of the first film? Are you excited for the next chapter, have you already prepped your bum cheeks for another long stint in a cinema chair?!

Well, if you haven’t read the book then here’s what you can expect from Peter Jacksons next move!

The second in a trilogy of films adapting the enduringly popular masterpiece The Hobbit, by J.R.R. Tolkien, The Hobbit: The Desolation of Smaug continues the adventures of the title character Bilbo Baggins (Martin Freeman) as he journeys with the Wizard Gandalf (Ian McKellen) and thirteen Dwarves, led by Thorin Oakenshield (Richard Armitage) on an epic quest to reclaim the lost Dwarf Kingdom of Erebor.

The Hobbit: The Desolation of Smaug opens nationwide across the UK on 13th December 2013.